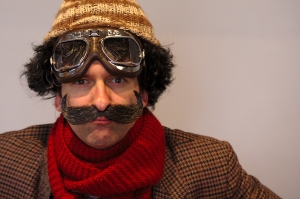 Tristan plays Albert in this show, and also controls the sound, the lights, and the loop station from the stage, as well as being a amazing percussionist on the bicycle and rocking a great xylophone solo!

A highly experienced sound and lighting engineer, this is not the first time that Tristan has taken to the stage with the company.

In 2010 he became part of the Diaspora team which meant as a technician-actor he was asked to do many things he was not used to – now he stays on stage with ease, doesn’t blink an eye when we ask him to move, dance or puppeteer, and plays clarinet for us in Diaspora.

Tristan started with the company in 2009 and has now also taken to the stage in our shows Diaspora, Jojo & Billie’s Tour de France  and our circus show Mâ.

Tristan is from the South-East of France and originally trained as a sound engineer, working for 7 years for Radio France Bleu, Champagne, before moving to Canada where he worked for music festivals.

Passionate about bringing music and artistic events to the community he moved back to France where he programmed for three rural venues and a yearly festival with the association Coeff. 7.

He was responsible for programming, marketing, artist relations and graphic design and continues to graphic design from time to time for other venues and companies.

He worked as the sound engineer and tour manager for the children’s concert, ‘Bas Les Pattes’, which has toured all over France, including the festival Les Francofolies and many prominent children’s festivals.

He is musician and composer in the French electro duo Radio Edith, a electro-concert where he plays bass, clarinet, keyboard and machines. 2015 saw them join the Mâ creative team and 2019 sees the recording and pressing of their first vinyl.

In 2017 je joined the technical team of Parasites, a show by French circus company Galapiat Cirque. The show, created by Moïse Bernier was chosen for the circus big top ‘Occitanie fait son Cirque’ for the Avignon festival in 2017.

What to know a bit more about him and his music?

Go to his website or some of his compositions can be heard here :

As our sound & lighting engineer he designed for Portmanteau, Silver Moon, Diaspora and JoJo & Billie.

He has built the wooden structures for this show and during his work with the company has learnt to construct, paint and sew, making the flats, decorating the set and sewing black curtains for our Christmas show, ‘Silver Moon’.

He has also created the fun, Monty-Python inspired animation in the show.

With the company Tristan has negotiated with technicians from venues in Finland, Ireland, France and the UK and is bilingual in French and English.

He is highly adaptable to large venues, small venues, studios, village halls, open air spaces, as long as there’s a coffee for him, and maybe the promise of a biscuit if he works really, really hard.

A pleasure to work with, Tristan will be hiding under a very big moustache, but believe us, he is there!